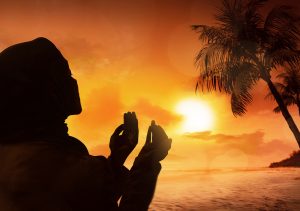 The Night Prayer or Qiyam Al-Layl stands for the practice by Muslims as they stand in the night in prayer. This prayer extends from the time immediately after `Isha’ Prayer until the Fajr (i.e., Dawn) Prayer.

Many narrations or hadiths by Prophet Muhammad (Peace and blessings be upon him) as well as ayahs of the Ever-Glorious Qur’an show the significance as well as importance of the Night Prayer and the merits attributed to those who regularly and properly perform it.

Allah the Almighty says what may mean,

“O you who wraps himself (in clothing), arise (to pray) the night, except for a little – half of it – or subtract from it a little or add to it, and recite the Qur’an with measured recitation.” (Al-Muzammil 73: 1-4)

The Prophet (Peace and blessings be upon him) also said: “You should pray Qiyam al-Layl, for it is the habit of the righteous people who came before you, and it will bring you closer to your Lord, expiate for bad deeds, prevent sin, and expel disease from the body.”(At-Tirmidhi and Ahmad)

Given this, what is it really that a Muslim loses if s/he abandons and/or neglects the Night Prayer?

At least, one will lose thirteen (13) precious things; foremost among which are what follows:

One will lose the entitlement to the title or description of `Ibad Al-Rahman (i.e. Servants of the Most Compassionate), as Allah the Almighty says,

“And the servants of the Most Merciful are those who walk upon the earth easily, and when the ignorant address them (harshly), they say (words of) peace. And those who spend (part of) the night to their Lord prostrating and standing (in prayer).” (Al-Furqan 25: 63-64)

He will lose entitlement to the title or description of “the Righteous”, as Allah the Almighty says,

“Indeed, the righteous will be among gardens and springs. Accepting what their Lord has given them. Indeed, they were before that doers of good. They used to sleep but little of the night. And in the hours before dawn they would ask forgiveness.” (Al-Dhariyat 51: 15-18)

He will lose entitlement to the title or description of “the Devoutly Obedient” or “the People of Understanding”, as Allah the Almighty says what may mean,

“Is one who is devoutly obedient during periods of the night, prostrating and standing (in prayer), fearing the Hereafter and hoping for the mercy of his Lord, (like one who does not)? Say, “Are those who know equal to those who do not know?” Only they will remember (who are) people of understanding.” (Al-Zumar 39: 9)

He will lose the “high unique station” designated for those standing in prayer at night, as Allah says,

“They are not (all) the same; among the People of the Scripture is a community standing (in obedience), reciting the verses of Allah during periods of the night and prostrating (in prayer).” (Aal `Imran 3: 113)

He will lose the chance that “supplication may be answered” such as that of Prophet Zakariya, as Allah the Almighty says what may mean,

“So the angels called him while he was standing in prayer in the chamber, “Indeed, Allah gives you good tidings of John, confirming a word from Allah and (who will be) honorable, abstaining (from women), and a prophet from among the righteous.” (Aal `Imran 3: 39)

He will lose the chance to “be protected and assisted” by Allah the Almighty, Allah says,

“O you who wraps himself (in clothing). Arise (to pray) the night, except for a little – Half of it – or subtract from it a little. Or add to it, and recite the Qur’an with measured recitation. Indeed, We will cast upon you a heavy word. Indeed, the hours of the night are more effective for concurrence (of heart and tongue) and more suitable for words.” (Al-Muzammil 73: 1-6)

He will lose the opportunity that his “good deeds do away with misdeeds” as one of the preconditions for this is that one performs the prayer at the approach of the night. Allah the Almighty says what may mean,

“And establish prayer at the two ends of the day and at the approach of the night. Indeed, good deeds do away with misdeeds. That is a reminder for those who remember.” (Hud 11: 114)

He will lose the opportunity to “be resurrected to a praised station in Paradise”. Allah says in His Ever-Glorious Qur’an what may mean,

“And from (part of) the night, pray with it as additional (worship) for you; it is expected that your Lord will resurrect you to a praised station.” (Al-Isra’ 17: 79)

He will lose “Allah’s Satisfaction” with him, as Allah says,

“So be patient over what they say and exalt ( Allah ) with praise of your Lord before the rising of the sun and before its setting; and during periods of the night (exalt Him) and at the ends of the day, that you may be satisfied.” (Taha 20: 130)

He will lose “Allah’s constant care” about him. Allah the Almighty says in His Ever-Glorious Qur’an what may mean,

“And rely upon the Exalted in Might, the Merciful. Who sees you when you arise. And your movement among those who prostrate.” (Al-Shu’ara’ 26: 217-219)

He will lose the opportunity to be among those regarding whom Allah says “You are in Our Eyes”. Allah says in the Qur’an what may mean,

“And be patient, (O Muhammad), for the decision of your Lord, for indeed, you are in Our eyes. And exalt ( Allah ) with praise of your Lord when you arise. And in a part of the night exalt Him and after (the setting of) the stars.” (Al-Tur 52: 48-49)

He will lose the “good that is hidden” for those who stand in prayer in the night. Allah says,

“And no soul knows what has been hidden for them of comfort for eyes as reward for what they used to do.” (Al-Sajdah 32: 17)

He will lose the chance to “follow the sunnah” of Prophet Muhammad and his companions. Allah the Almighty says in the Qur’an,

Given this, will a sane Muslim do without, neglect or abandon standing in prayer in the night or the Night Prayer? I doubt it!

Again, the Prophet (Peace and blessings be upon him) said: “Verily, there is one hour during the (entire) night when any Muslim (submitting to the Will of Allah the Almighty) may call upon Allah and request anything of Him, regardless of whether the matter be worldly or of the hereafter. Allah, the Almighty will grant and fulfill the request. This is the case every night.” (Muslim)

Dr. Ali Al-Halawani is Assistant Professor of Linguistics and Translation, Kulliyyah of Languages and Management (KLM), International Islamic University Malaysia (IIUM), Kuala Lumpur, Malaysia. He was Assistant Professor and worked for a number of international universities in Malaysia and Egypt such as Al-Madinah International University, Shah Alam, Malaysia (Mediu) and Misr University for Science & Technology (MUST), Egypt; Former Editor-in-Chief of the Electronic Da`wah Committee (EDC), Kuwait; Former Deputy Chief Editor and Managing Editor of the Living Shari`ah Department, www.islamOnline.net; Member of the International Union of Muslim Scholars (IUMS); and member of the World Association of Arab Translators & Linguists (Wata). He is a published writer, translator, and researcher. You can reach him at [email protected].

How to Control Your PC Using TweetMyPC

Why Can’t a Muslim Woman Marry More Than One Man?

Sonny Bill Williams: Islam Made Me the Man I Am Today

How to Create and Market a Facebook Support Group

An Ex-Atheist Explains His Journey from Atheism to Islam

Indeed, with hardship [will be] ease. [6] As-Sharh ( The Opening Forth)